"A Look at Call of Duty, Through the Eyes of a Noob"

In this blog I bitch about the world Call of Duty, things that I would like to see removed, things I would like to see added and of course, how funny it is to annoy those little gits who take the multiplayer so seriously.
I love playing the Call of Duty games online, I know that sounds crazy but I do...and not because I'm some total badass either, actually it's the complete opposite I suck like Monica Lewinsky. It's very seldom that my kills out number my deaths, but honestly I'm okay with that because I play for fun not because I'm looking for a purpose to be alive. I also carry a lot of body bags with me when I play online, that way I can clean up all my dead bodies laying around the battlefield when I respawn...we can't litter in cyberspace we need to leave it as we found it so that Woodsy the Owl would be proud of us! 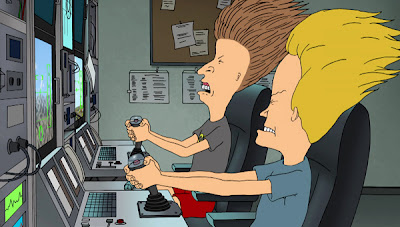 I always get my butt kicked by people who sound like Beavis and Butt-Head's little sisters... and who are cursing me out because I either lost the game for them or killed them with a "noob tube". By the way, why is it considered a bad thing if I use the "noob tube" (aka grenade launcher)? It's not as if I'm cheating or doing something underhanded, it's available at the main menu for God sakes...can someone please explain this to me! That and isn't the point of the game to kill the opposing team, so what's the difference if I do it with a bullet or a grenade...trust me either way I'm not much of a threat.

These punks also all use that new fangled internet/video game language which goes right over my head, like "noob" for example...the first time I heard it I thought someone said boob and I started getting all excited. They don't know what teamwork is either, I like to say they suffer from WEAMSS (Wannabe Eighties Action Movie Star Syndrome). I know that sounds kind of odd considering most of them grew up in the nineties when it was cool to wear flannel and hate yourself and pretty much everything else for that matter, but they all want to be the one man army like Rambo, Dirty Harry, etc.

I myself am kind of like the Bizarro world version of Rambo...I'm Ramblow since I suck really bad at shooting guns and killing people. It's like Elmer Fudd shooting at Bugs Bunny when I find an enemy...I'm shooting all over the place and not hitting them once...and talk about rubbing salt into the wound, most of they time they wait until I run out of bullets and I'm in the middle of reloading and then they walk up to me and kill me with that stupid freaking knife.

Speaking of the knife... 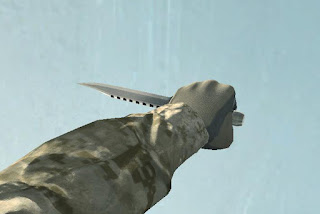 We know it’s all in the presentation; a sponge cake is just as good as any other sponge cake, at least until you put the frosting on. With that said, here’s my beef with the knife, and I do apologize for all the food references...especially if you’re hungry while you’re reading this.

I know you need to have a close combat melee system in place to make things more interesting and competitive; my only request is that they just make it more believable. For example, Halo: Reach’s assassinations or Killzone 3’s brutal melees, granted they too are one hit kills, but like I said prior, the presentation is what makes it hurt less.

I can watch a brutal melee or an assassination and have no doubt in the end, that if that happened in real life I would be dead as a doornail but on the flip side to that, I see my character run by another player in an online match of Call of Duty and get slashed with a knife and die instantly...that's just hard to swallow. Most importantly if you come across an enemy performing one of these kills on a team mate of yours, you can surprise them with a shotgun blast in the back. It makes it more of a risk to try to pull these kinds of moves off, which adds to the over all experience if you ask me.

I know it’s just a game, not everything is going to make sense, however, the Call of Duty games pride themselves on making it as close to reality as possible so I don’t think I’m asking too much. We all know pretty much every game has a flaw of some kind and truthfully I’m not going to stop playing the Call of Duty games online.

(I really only hate the knife because I can never get a kill with it...I might as well be running around with a spoork.)

Okay, enough about the knife...

I think it’s about time for some new “perks”; the standard assortment is getting kind of stale in my opinion. Below are two ideas I have, check them out and let me know what you think. Who knows maybe the Call of Duty Gods will read this post and surprise us in the next installment.

"Rambo" - This perk would allow you to dual wield two primary weapons, just as John J has in pretty much all the Rambo movies. The pro version would give you the ability to go topless and to scream as you're firing your weapons. 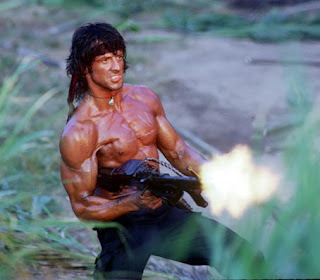 "Blade Runner" - This perk would make it impossible for someone to kill you with one slash of the knife. I personally think the knife is a bunch of crap anyway, when it comes to the Call of Duty franchise, this is one thing in my opinion Medal of Honor got right. Numerous bullets versus one knife slash, I mean come on man! The pro version would cause anyone who tries to knife you; to break their blade, leaving it useless the rest of the match.

Overall it's not a bad game...rregardless of all the flaws, which by the way I must point out is not so much with the game itself, but more so the other players in my opinion. Anyway, I just wanted to share my two cents, which by the way I need back because the price of gas keeps going up!