"Next Gen Consoles Can Suck it!"

By "suck it' of course I don't mean literally, so get your mind out of the gutter, because if they really could "suck it" I would definitely be getting one...just don't put in the wrong disc when you get started, because there's a big difference between Kratos and the chicks from Dead or Alive Xtreme Beach Volleyball.
By the end of 2013 we'll most likely have the next gen consoles of all three of the major players (Nintendo, Microsoft and Sony) in the game out on the market and possibly even some new comers, and I for one am not happy about it. I'm not ready, I'm still having way too much fun with the Wii, PS3 and the Xbox 360 to want to toss them aside just to make room for the new. We all know when the next gen consoles come out, the current gen consoles will become forgotten relics, with no support at all...they will be like the kid whose parents just brought home his new baby brother/sister from the hospital...they will be tossed aside and unloved.
I know support won't disappear day one, but it will happen with a quickness and that's what scares me. I also know that there will be new games being released for this generation of consoles, but not enough to really make an avid gamer cry out in excitement...I would really hate to walk into a Best Buy and/or Gamestop and see only three or four new games to choose from......all year 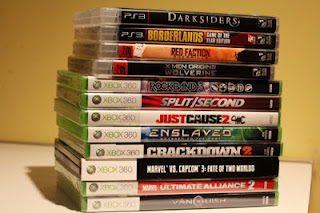 My backlog is off the shelf....literally off the shelf, and I'm OK with that. So I may just stay in this gen for as long as possible, holding off buying anything next gen until completely necessary. I am playing the games I have, but with limited time and this thing called life always getting in the way it's hard to finish them all. I think I'm insane, because I can clearly see that I have a shelf full of games I haven't beaten yet, but still I buy more. I can't help it, it's like an addiction, no matter how hard I fight to sustain from buying more, I just can't. I think it's in my genes.....along with the fat gene......stupid fat gene keeping me from being skinny. Now if you'll excuse me, I'm off to McDonalds for a double Quarter Pounder with cheese, large fries and a Diet Coke....because I'm watching my figure.
I know technology evolves at the speed of light and honestly I'm OK with that, but in this particular situation, it just feels too soon and a little rushed...like everyone is trying to beat its competitors out of the starting gate. I don't know, maybe I'm alone in this, but I just can't take the plunge.....at least not until a few more years. 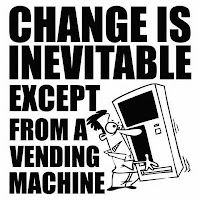 There's just so many awesome games out and coming out that can keep us busy for a long time, that is unless you're unemployed living with your mom doing nothing else but gaming. It feels like there's so much more life left in the consoles of this generation.....well maybe not the Wii, but the PS3 and Xbox 360 for sure.
No one likes change, whether it be in life or from the exchange of paper currency, it's scientifically proven...the only change I like is that of clothing, especially underwear and socks...you can only sport the same draws for so long before you end up getting a rash.
MJM
Posted by Michael J Mele at 9:15 PM