"Confessions of a Geek" 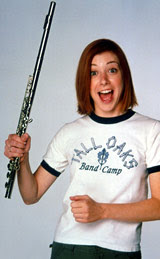 This could very well be me:  A redhead who played the flute in band from elementary school through college and beyond.  But I never went to band camp.  So I can’t have the cool catch phrase.

My band days may be long gone, but that doesn’t make things much different for me. Throw me in any social situation these days and I’m like a fish out of water, a hobbit out of the shire, or dare I say a taun taun in the desert.  I know, AWKWARD.  I live amongst the disturbingly thin and beautiful Scandinavian population in Central Iowa where I fit in sooooo well.  Good times.

Part of my problem is my inherent inability to make this thing known as small talk.  While I can talk about the weather for a few minutes, and maybe a thing or two about my kids, the vast majority of things that fascinate other people don’t even really register on my radar.

That’s because I speak GEEK.  Yeah, I’m one of those.  Not only am I a geek, I’m also married to one.  In addition to this, I’m raising my very own geeklings.  I’ve seen and I can totally kick your butt at Star Wars trivia. 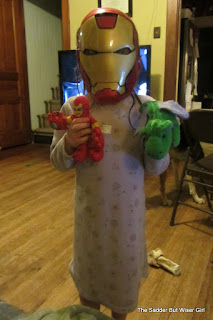 One of my geeklings.  I think the purple nightie sets off the Iron Man mask quite well, don’t you?

Don’t get me wrong, I like some of the things that decidedly normal people like.  I like clothes.  I work out.  I love movies and music.  I like a big glass of wine on the weekends.  I like to look at Pinterest.  But despite all of these things I seriously belong to a whole other  world.

Years ago I tried to hide my geekiness and act like normal people, but as I have gotten older and have been referred to more than once as kind of weird, I realize that it really doesn’t matter any more.

So I’m going to make it a little easier on you people.  I present to you the vastly contrasting things between what would be considered a “normal” female’s world and mine:


********************************
I like to talk about movies.  But don’t talk to me about The Notebook or Silver Linings Playbook.   I’d rather talk about Iron Man 3.
Oh, you know a little French?  I know a little Klingon.
Golf is a four letter word in your house?   Hmmmm, Skyrim is the same thing in my house.
Do you own pets named Fluffy and Spike?  Mine are named Rogue and Neo.
What do your kids like to spend money on?  My 5 and 8 year old children pooled their Christmas money so that they could buy Skylanders for our Xbox.
So you say you can name all of the people on Real Housewives of Orange County?  I can name every major character on all five Star Trek series.
You said you’ve read the whole 50 Shades of Grey Trilogy?  I’ve read the whole Lord of the Rings Trilogy.
You named your kids names like Emma and Brayden.  We considered names like Jadzia and Zephram.
You spent your Saturday morning getting a pedicure?  I spent mine at the comic book store. 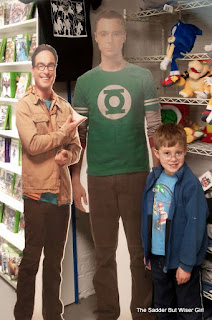 My son loves the comic book store, and for good reason…
Your say your kids got an Xbox? I’ll see your Xbox and raise you an Atari, a 3DO, a Nintendo, a SuperNintendo, a GameCube, a Playstation 2, and a TANDY.  Yes, a Tandy.
Your favorite show is Gossip Girl?  Mine is The Big Bang Theory.
You went to see Sex and the City on opening night?  I saw Star Trek: Insurrection on opening night.  I was one of the only girls there, unless you counted the ones in the ISU Marching Band.  By the way that had to be the coolest night of my life.
How many times have you watched Bridgette Jones Diary?  I’m pretty sure I’ve seen The Empire Strikes Back at least 100 times.
You play the Sims a little?  I bet my husband’s Sims could kick your Sims asses.
What did you ask for when it was your birthday?  I asked to go see Iron Man 3 and Star Trek Into Darkness! 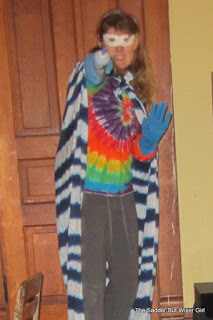 Sarah Almond is the mother of two geeklings and is married to a certified Evil Genius.  When she’s not losing her keys, avoiding the dishes,  or watching her husband build an Iron Man suit, she writes the blog The Sadder But Wiser Girl.  You can read all about the insanity that is her life at http://sadderbutwiser.wordpress.com
********************************
So there you have it.  I’m totally okay with being a big geek.  If that scares you away, so be it.  I wouldn’t be trying too hard to talk to you anyway.
Posted by Michael J Mele at 9:54 PM