I’m not your typical nerd, because I like both Star Wars and Star Trek equally. I know to some of you that is sacrilegious, and I may even get my ass kicked by a nerd gang favoring one side or the other, but I’m willing to take my chances.

I thought it would be fun to compare the two, at least on issues I find important, to see who has a leg up on the other. 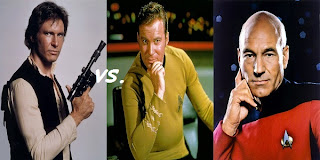 I’ve included both Kirk and Picard because I know there is some kind of internal struggle between you Trekkies as to who is the best, so I figured I would fair to both sides and give you Kirk/Picard fanboys a choice.

Who would I want as my Captain, who do I think would do the best job piloting my ship and telling me what to do?

Honestly I think Solo and Kirk would both be too concerned with nailing all the alien babes we came across to adequately get the job done, so for me I would have to choose Picard. 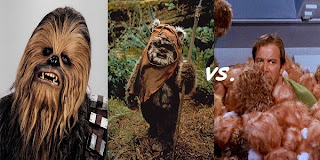 Really, is there any doubt who wins here?

The Tribbles are nothing more than bad toupees.

I can just imagine that their leader is some kind of alien Donald Trump, who sends them out to steal all the Rogaine and hairbrushes from the people of space…because if he’s going to have a bad hair day, than so is everyone else.

Now the winner between Chewie and the Ewoks, well if it was a fair fight I would say Chewie, but we all know those little Ewok bastards will gang up on him and kick his ass, so I would have to say the Ewoks. 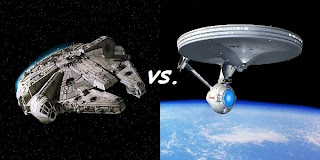 This is another tough one, because either one would impress the ladies.

I think if you were spotted in either or when you came across some space chicks you would have no problem docking your space shuttle in their landing bay, if you know what I mean.

So in this case I would have to go by which one I think would be the least problematic and more reliable, so with that said I’m going with the Enterprise. 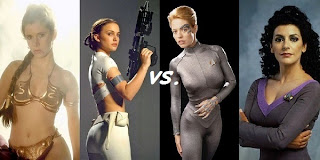 Honestly I wouldn’t kick any of them out of bed…and a mother, daughter team…does it get any better.

So needless to say this one is a tie, both Wars and Trek have some nice pieces of space ass. 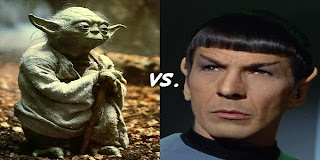 Well they both have pointy ears and bad haircuts, so besides the whole green skin thing, they could pass for a father and son.

With them both of them constantly correcting everyone, and always telling us what to do, I would have to say that both would be as annoying as heck.

I guess I would go with Spock, because unless he sneaks up behind me and gives me a Vulcan neck pinch, I really believe I could kick his ass if he gets out of hand.

Yoda on the other hand is a total badass and would serve me up on a platter without fail. 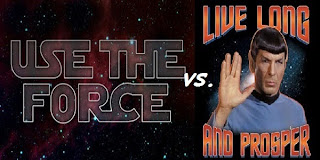 “Would You Please Stop Saying That?”
Use the Force vs. Live Long and Prosper

I don’t know about you, but to me, “use the force” sounds like something you would hear at college frat house during a drinking game, or even something your girlfriend would say during the nasty.

Now remember we are not talking about which one is better overall, because in all reality when it comes time to kick some ass I would rather have the force over some Vulcan gang sign and hippie nonsense.

So which one is the least annoying to me, which one would I mind hearing a few more times before I ripped my ears off, probably live long and prosper. 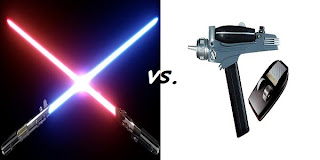 We can all agree that phasers suck, and most of the time they are set to stun anyway, so not really all that deadly.

Now lightsabers on the other hand are badass, they can block the shots from the phasers and chop suey them right in half making them nothing more then bookends.

So all in all I would have to say this is an easy one, lightsabers for the win. 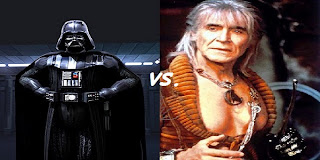 Kahn is a shot caller; while Vader on the other hand is only following orders, does that make him any less of a badass, not at all.

My only problem with Vader is that he’s too wishy washy, one minute he’s trying to take over the galaxy, and then the next, he’s trying to play father knows best.

I guess with all his attachment issue aside, he is still one total badass, so I would have to say that Kahn and Vader are both straight up evil pimps, so this one is a tie. 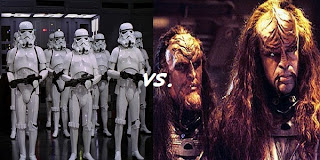 “Most Dangerous Crew”
Stormtroopers vs. Klingons

Stormtroopers, they’re all clones, so you find one’s weakness and you found them all. This is not a good thing when you’re fighting for the title of most dangerous crew.

Now Klingons are straight up warriors, these fools fight just for sport, they probably even fight in their sleep.

I would have to go with the Klingons right here, because I want my crew to be ass kickers, not boot lickers.

The results are in...and the winner of the battle royale is…