“The Who Could Beat Who Game” 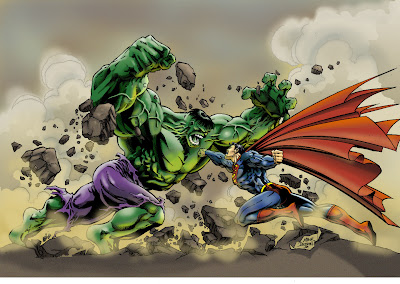 When we were kids we would play the “who could beat who” game, mostly involving superheroes and/or action film stars, some of the more popular bouts were Superman vs. the Incredible Hulk and Chuck Norris vs. Bruce Lee just to name a few.
We would all plead our case as to why our choice was the more dominant one, and how he/she would kick their opponent’s ass with ease and come out victorious. Some of the battles would get a little heated, especially if one of participants was a fanboy/girl of one of the hypothetical contestants.
This game was actually a lot of fun and kept us entertained for hours, but unfortunately it just up and vanished as time went by. As we get older we are supposed to mature, we are supposed to stop playing stupid games like this and do grownup things like work and pay bills...yucky.
I say get the funk out of here, let’s enjoy childish things, and in the famous words of Michael Buffer, “Let’s get ready to rumble”!  I’m going to throw some matches out to you, and tell you why my choice will win; and you can feel free to add your two cents into the mix but just remember my choice is the only choice.
Here we go…
Match #1:
Handi-Man (In Living Color) vs. The Greatest American Hero
Alright this one is easy, everyone knows you do not hit the handicap, so hands down the winner is Handi-Man.
Match #2: Star Wars fans vs. Star Trek fans (aka Trekkies)
This one is tough, and honestly could go either way, but I do believe that for the most part Star Wars fans are more masculine, so I would have to say that Star Wars fans would win…but only by a narrow margin.
Match #3:
Democrats vs. Republicans
I would have to say that the Republicans would win this bout, hands down. They have all the guns and are not afraid to attack first and ask questions later, just check out the mainstream media if you don’t believe me.
Match #4:
Jesus Christ vs. Allah
Now this is a toughie, because we all know extremist on either side can really throw down and leave a lot of dead bodies in their path. So I guess it all comes down to what Jesus and Allah show up, if it’s the “you have what we want” Jesus and Allah then it for sure will be an all-out war and can go either way, but if it’s the peace and love Jesus and Allah that show up then we’re in for a really boring match.
Match #5: 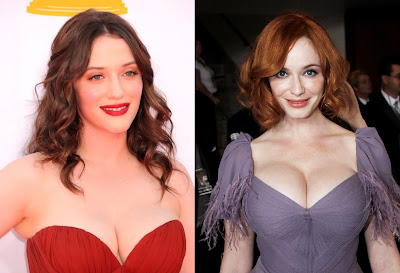 Christina Hendricks (Mad Men) vs. Kat Dennings (2 Broke Girls)
Who cares who will win this one…I just know it would be really fun to watch. I say for this fight we bust out the baby oil and have it take place on a trampoline, any objections?
Okay, this is more of a wet dream rather than a prize fight, but what can I say, I’m a man. I know some women who are reading this probably think I’m being sexiest with this match, so for you non-lesbian women feel free to substitute any two hot dudes in place of Christina and Kat…and of course the stipulations would remain the same, so have at it.
Well there you go, there are the matches, check them out and let me know what you think.
MJM
Posted by Michael J Mele at 1:40 AM