“Take a Turn for the Worse” 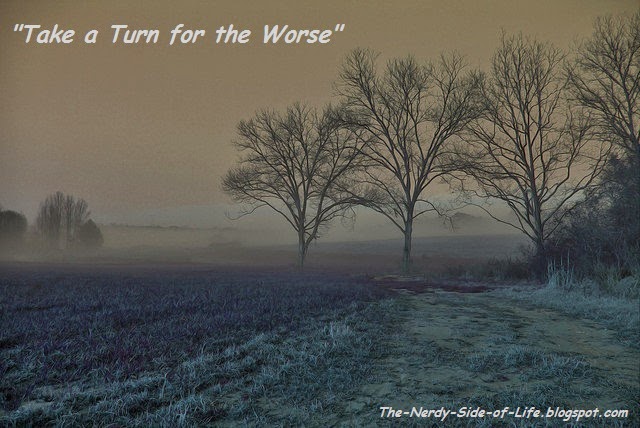 Wherever I was it was cold and hard, comparable to one of those metal slabs in the morgue, but thankfully that was the only similarity I shared with those stiffs.

Everything was all fuzzy and unclear, I had no idea what was going on or why I was where I was, I was completely lost like the kid on the back of the milk carton.

I went to stand up so that I could better assess the situation, find out what was going on and figure things out.

However, standing wasn’t as easy as I thought it would be, it was as if none of my limbs were working accordingly and it took a whole lot more effort than it usually does to get them to perform as they should. 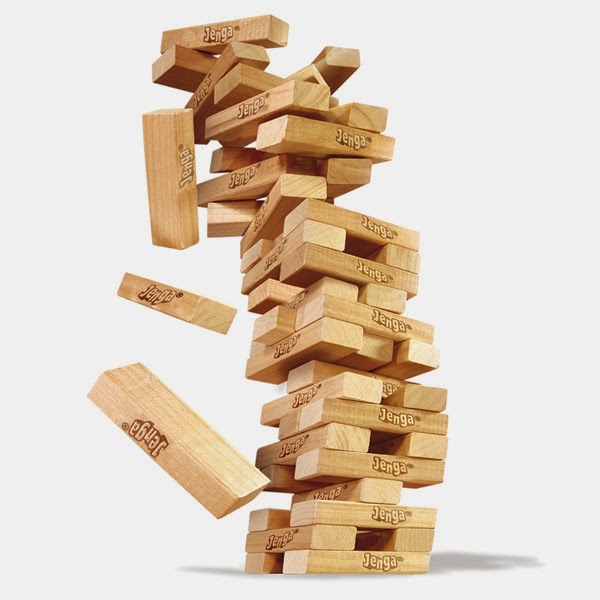 Making it to me feet was only half the battle, because once I got myself upright I had to make sure I could keep myself that way and not end up falling down similar to a drunk who just left the bar after last call.

I could feel myself swaying back and forth; it was as if I was on a boat in the middle of the ocean during a bad storm, it was almost impossible to get my bearings.

I was finally able to compose myself; I was able to stand without toppling over like a Jenga tower whose player had Parkinson's disease.

I could now see that I was outside, in the middle of a field somewhere, and I couldn’t really tell what time it was but I knew it was late because the sun was nowhere to be found.

I attempted to start walking, thinking I could find someone that could tell me what was going on.

But my legs felt limp and numb, like the circulation had been cut off from them for quite some time, they were as useless to me as cinderblock shoes would be to a late night swimmer…isn’t that right mafia.

I just couldn’t lift them up; I could only slowly drag them along, my feet felt as though they weighed a ton, the ground was metal and they were magnets. 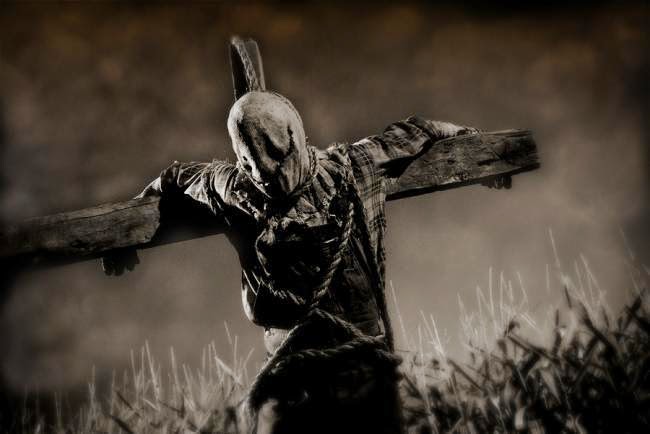 Knowing that at this rate I wouldn’t be getting anywhere fast, I decided to scream out for help, but no matter how hard I tried I just couldn’t get any actually words out of my mouth, only grunts and gargles.

Now being even more confused, I just stood there still and lifeless, equivalent to a scarecrow watching over its field.

And then all of the sudden my pondering was rudely interrupted by a loud growl that was coming from my belly, my tummy was in turmoil and needed to be fed, kind of took me by surprise considering the situation but what can I say, the stomach wants what the stomach wants.

So again I started moving forward, dragging my legs behind me like they were two dead bodies.

I wasn’t sure where I was going, or even what was happening, I just knew I had to eat something soon because my hunger was growing and becoming more savage by the minute.

I couldn’t explain it, I was really hungry but what I was craving wasn’t of the traditional sense, at least for me it wasn’t. 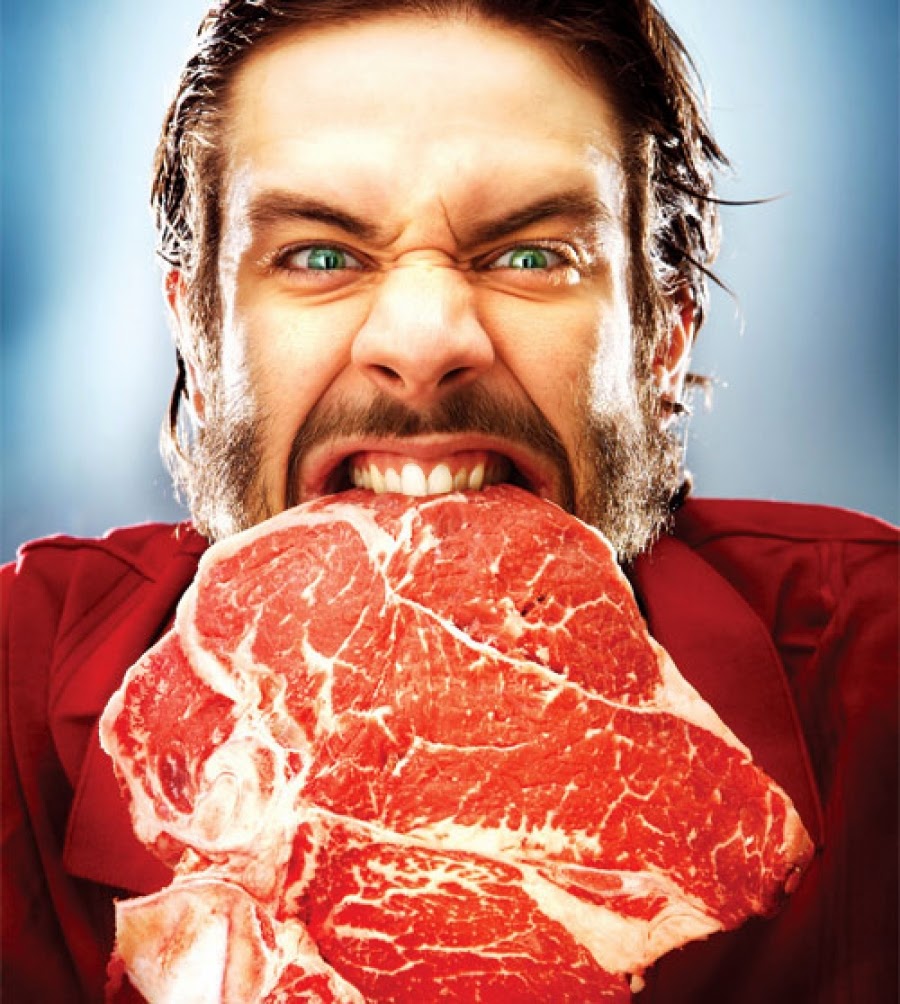 I wanted flesh, and not the flesh of a chicken, cow or even that of the scrumptious pig, but I wanted human flesh, fresh off the bone, it was as if the spirit of Jeffrey Dahmer consumed me and was now in charge of my appetite.

I didn’t want it served to me either, my primal instincts kicked in and I wanted to hunt it, because you know like they say, the greater the struggle, the sweeter the meat.

I know it’s against the moral code and everything we stand for, but I can’t help it I’m craving a people pot pie and unfortunately there doesn’t seem to be anything I can do about it, the way to a man's heart is through his stomach…or so I’ve been told.

I was as agile as a cat, Garfield the cat to be exact, but I knew that if I kept at it and didn’t give up that I would eventually catch my prey and be able to enjoy a nice yummy meal.

You don’t always need to be a cannibalistic ninja to eat well, us slow and steady types can handle our own, don’t believe me just check out Mr. Jason Voorhees, that dude never breaks a sweat and always catches his prize in the end.

At first I thought I was drugged, somebody roofied with the hopes of having a good time with my lifeless body, but then it came to me, I was a zombie (or a walker if you want to be hip). 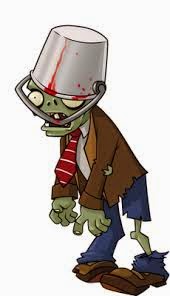 As I said prior, I wasn’t really quite sure how it happened; I was obviously once fully alive and now somehow became deader than a doornail and in the process caught the zombie flu, and as a result of that I was now one of the living dead; I was able to survive just about anything except a blow to the dome.

So with that being said, the first order of business (after finding a meal of course) was to find myself and nice strong helmet to protect my melon.

I’m putting that on my bucket list, and using that same bucket to carry around all my appendages that fall and/or that are ripped off.

I’m also not sure if it would be considered necrophilia or not, because I am living and I am dead so it’s difficult to tell, but I would want to get some booty before I finally kick said bucket…that is as long as I don’t lose my pecker anytime during my travels.

Was being a zombie really all that bad, was it truly a turn for the worse, I mean aside from my limps falling off as if they were just taped on and the inconsolable hunger for braaaaaaaaaaaaains was it the worst thing that’s ever happened to me, not by a long shot?

Sure my body is decaying similar to the teeth of a meth addict, my skin feels identical to Jello and my face looks like it was on fire and someone put it out with a bag of dimes, but there’s always plastic surgery…am I right?

I can feel my intelligence slowly starting to slip away, like sands through an hourglass or our hopes and dreams through our elected officials, so let me wrap this up before I’m brain dead and surviving on instincts alone, kind of like Kanye West.

It’s now time for me to skedaddle and to be on my way, and if I happen to run into you on my journey please forgive me if I take a bite out of you as if you were crime and I was McGruff the Crime Dog.