“From Barcelona with Love” 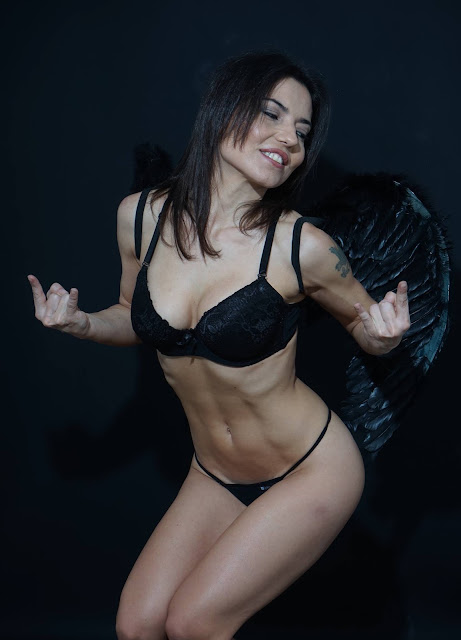 Please welcome back to The Nerdy Side of Life, Mari Cielo Pajares! Forget “Star Wars: The Last Jedi”, this was the sequel you’ve been waiting for! Remember, English is her second language, so don’t be crap pile and give her a hard time about it, just enjoy it and appreciate the effort!

She has been up to a lot since we last spoke, always on the move like the Energizer Bunny. Try not to blink because you will miss her. Now sit back, relax and get to know her for a second time (first time here).

1. First things first. We had a big scare this year because you were in a bad accident. How are you feeling? Could you tell the readers what happened?

Mari Cielo Pajare: A confused driver getting in my way. I was broken but now I'm fixed, end of story. 14 stitches in my hard head, new pubis (which is always wonderful what you can experience with a new one) and some war scars to show to the kids. The car still in therapy. LOL!

2. That special someone, same sex, opposite sex or who the hell cares what they are packing in their trousers because everything goes?

Mari Cielo Pajare: LOL! Are you actually asking me if I'm gay, straight or bisexual? Nice one! First time I have ever been asked. Actually, what I do in my bed and with who I do it with is my own business. I will just tell you I'm an open minded being, not scared of learning new ways to obtain pleasure.

3. We know that you’re a fan of the horror/thriller and action genres, both acting and directing, but would you ever consider something in the comedy and/or drama department?

Mari Cielo Pajare: Absolutely! When I make a film my preferred genres are thriller, suspense, action and horror. l also like to add a twist of sci-fi in occasionally. Maybe because when I was a kid I used fiction as an escape. I like to express myself and in turn help others escape. When I do theatre I prefer comedy. I love to make people laugh, as difficult as it is. I'm a walking clown 24/7 and I usually entertain them with my own dramas.

4. Pets. Have some, don’t want any or maybe later on down the road? If you do have some, are they from the creepy crawly family or the cute and cuddly one?

Mari Cielo Pajare: I used to have a wolf a long time ago, and had some cats too. I'm an animal lover. Any kind, I’m not going to judge an animal, they don't do it with us so who am I to do it with them? I would LOVE to live surrounded by animals, they give me so much peace, stability and love, but unfortunately I travel a LOT and if I can't take care of them I won't have them. They are not toys, they are living beings that miss you and you very much miss them too.

5. What does the future hold for you as far as your career is concerned? What can we expect to see with your name attached to it or with you starring in?

Mari Cielo Pajare: Who knows! LOL. I'm open to explore whatever new projects land in my hands, and I create as much as I breathe so I always have something going on.

6. You have won many awards throughout your career, what are some of the most meaningful?

Mari Cielo Pajare: Winning something is always delightful, and whoever tells you they don't care lies. Winning a bet with a friend to winning the Oscars, it’s all good. We won 20 awards in my company and over 100 nominations, all of them are important to us and we are grateful to have been chosen with our humble films from thousands of projects submitted to these festivals. I must confess though that winning best actress at the Macabre Faire of New York was an amazing experience. 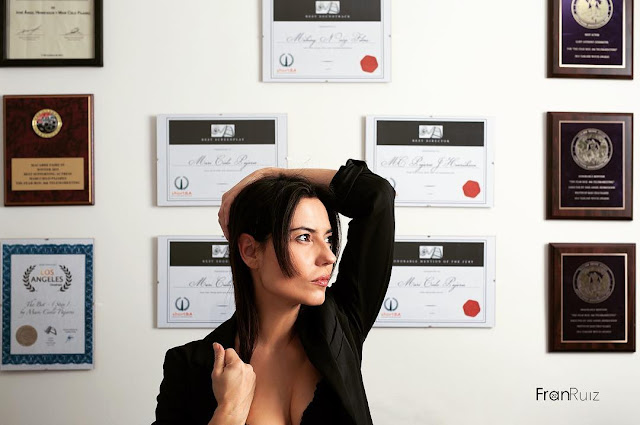 7. Netflix and chill or Screambox and thrill?

Mari Cielo Pajare: Street or beach and let's burn it.

8. Who are your idols, your heroes and your inspirations? Whose work do you admire? Whose work ethic do you hope to emulate? Who gives you that warm and fuzzy feeling in your tummy, in the good way like butterflies, not in the bad way like diarrhea?

Mari Cielo Pajare: So many inspiring men and women! Not easy to choose just a few. I guess that it depends on what are you really asking. Inspiring in my work as an actress or writer/director? Hitchcock, M. Night, Stephen King, Rod Serling, Victoria Abril and Jodie Foster are among some of who I admire.

In life as a guide for understanding? Nietzsche, Sartre, Hume, Voltaire are amazing people that throughout my life fucked me up and taught me what hurts and why.

Whose work do you admire? Professionally? Let's start with my father and some of my ex's. I need to admire a man to love him. Some will say it's admiration not love, but I'm fucked up and functional, what can I say.

I need music in my life too, so I'll tell you that I admire Freddie Mercury, Mozart, Foo Fighters, The Cure, Muse, Linkin Park and Bach to name a few.

I also admire the work of unknown people that sacrifice themselves to give us a better shittier matrix reality to live more comfortably. Those who we will never know their names but invented an amazing pain killer, a solution to opening a wine bottle easily. Jokes aside, too many people to mention in one interview.

Whose work ethic do you hope to emulate?  None! I have my own. Everyone has theirs.

Who gives you that warm and fuzzy feeling in your tummy, in the good way like butterflies, not in the bad way like diarrhea? Not sharing that kind of info. Butterflies are delicate and die if they have too many eyes on them, they like to fly free and avoid opinions. There are curious fuckers that entertain themselves by cutting off their wings.

9. Girls just want to have fun or taking care of business?

Mari Cielo Pajare: Girls have time for everything.

10. What advice would you give all the young ladies hoping to following in your footsteps?

11. How do you feel about Hollywood spending all their time remaking all these old and stale ideas instead of searching the underground for something new and fresh?

Mari Cielo Pajare: I hate people touching the classics. Sorry, no respect for those who don't bring new creations to life and twist what it's already perfect. 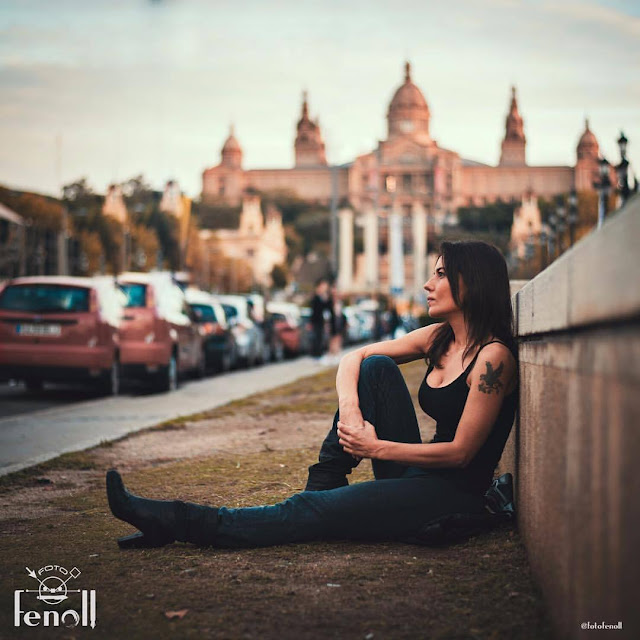 12. When you’re not busy with your career, what are some of the things you like to do for fun?

Mari Cielo Pajare: Anything. Lately I'm exploring my fears, so trying things I thought I would not be able to do. Then I have my go-to fun stuff like reading, (mythology, history and good suspense books are my favorites), anything related to water (swim, jet ski, diving, a nice bath at home), and of course sex. I'm picky, most of the time the idea of the bath and a good book s better than any option you have at that moment. I also enjoy cinema, theatre, life music, traveling, museums, billiards, walking, listening to music and sports.

13. What are your thoughts on the current state of the industry? How do you feel about all these allegations being brought to the forefront about powerful men abusing their positions and taking advantage of young women who are looking to make a name for themselves in the business?

Mari Cielo Pajare: Don't make me talk about it. They will burn me alive! I just think it is horrible that these kinds of things happen to men and women, but we are drowning in a hysteria about it. Any asshole can screw up the career of someone else just by inventing something or exaggerating an event. I find this disgusting too and disrespect for the victims of REAL abuses.

14. Smoke them if you got them or that crap is pure nastiness?

Mari Cielo Pajare: Smoke them if you got them always.

15. Would you consider yourself a girly girl, a tomboy or a hybrid version of both?

Well folks, that’s all she wrote…at least for now anyway. 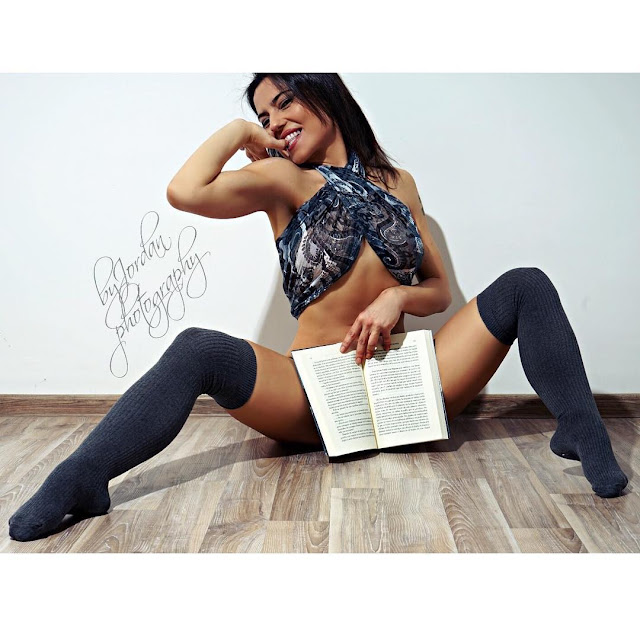 Here’s what she’s been up too since we last had the pleasure of speaking with her:

Her project "666 Telemarketing" ended festival circuit with a total of 20 international awards and 70 official selections.

She started the festival circuit with the pilot for "The Bet" from the "Styx" series, and not with a bad start at all (7 awards/ 17 official selections in only a couple of months). She is also considering the possibility of transforming the project in an anthology feature film.

She will be the lead in the film "The Cellar", which was recently in the 50th Sitges Film Festival.

Needless to say she is a very busy woman, always on the go and making something happen.

I hope you enjoyed getting to know Mari Cielo Pajare better and that you’ll check out her work. Support a struggling, and completely original/unique artist or you’ll be stuck with remakes for the rest of your life.

MJM
Posted by Michael J Mele at 7:59 PM No comments: